Don't Miss
Home >> Health >> How to breathe properly in every sport 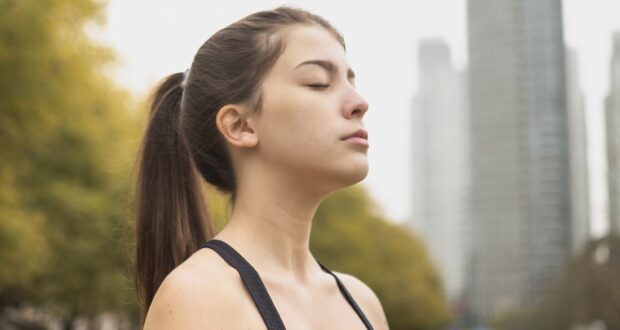 Breathe in, breathe out – easy, right? Not correct! But with our tips you will find the right breathing technique and improve your training performance.

You breathe in, you breathe out. You probably don’t care much about it because it happens automatically. But what you are doing unconsciously is extremely important. Incorrect breathing during exercise can affect your performance.

The vital capacity, the maximum lung volume that can be inhaled and exhaled, is an important performance indicator, especially in endurance sports. With our tips you will not get short of breath, but increase your lung volume.

What does correct breathing do?

The vital capacity can be increased by up to 20 percent. The better your body is supplied with blood and is therefore supplied with oxygen, the more organs, brain and muscles benefit from it. “At rest, the breathing rate is around 14 to 16 puffs per minute. That is a good 15,000 liters of air that is inhaled and exhaled every day,” explains Prof.

During physical exertion, the energy consumption and thus the oxygen demand increase, so that the breathing rate increases up to four times. A trained respiratory muscles – for example through endurance sports – can cope better with the strain than an untrained one.

What exactly happens when you breathe?

The breathing reflex is less caused by a lack of oxygen, but rather because the body has to give off used, carbon dioxide-containing air. Afterwards, fresh and oxygen-rich air flows into the alveoli with the inhalation. Your body’s need for oxygen could be met by breathing through your mouth alone. However, the nose serves as a filter organ for defense against infection, as it warms and cleans the air we breathe.

The air flows from the upper through the lower airways via the larynx, trachea and bronchi to the lungs. The bronchi branch out and end in the smallest alveoli, the alveoli. These enable the gas exchange of oxygen that gets into the blood and carbon dioxide that is removed from the blood. The oxygen is transported to where it is needed via the red blood cells, so that each individual cell is supplied with energy.

Are there any tools that measure breathing?

Breathing accompanies you naturally throughout the day. The rhythm and depth are not always the same, they change depending on the load. “Breathing is the best physiological indicator of mental states,” says Dr. Neema Moraveji, the results of research on based Calming Technology Lab of Stanford University the fitness tracker Spire  has developed. In addition to the Spire, there is also the Leaf Urban tracker from Bellabeat.

oth Spire and Leaf Urban record your breathing pattern and measure when you are concentrated, tense or relaxed. In this way, they help to be more conscious of breathing and, if necessary, suggest breathing exercises or meditation in the respective app. The trackers also look pretty stylish and can be worn inconspicuously on the waistband or bra with a clip.

No matter how you do it, you get enough air to live. But if you let the body decide alone, relaxed breathing would automatically go into the abdomen. This is more effective because the diaphragm, the most important respiratory muscle, is also moved. It effects up to 80 percent of the respiratory volume. Nevertheless, many breathe into the chest, because otherwise the stomach bulges out, which some may perceive as unattractive.

Abdominal breathing training is worthwhile, however, because the air space can be enlarged and the breathing volume increased. To do this, lie flat on your back and put a few books on your stomach. Inhale deeply so the books rise high and fall as you exhale. Do this exercise 3 to 5 minutes a day, and later try to use breathing while walking or running. You can increase your vital capacity after just one month.

Correct breathing will help you advance in any sport and then allow you to breathe more quickly again. But which breathing is right for which sport?

The higher the weight you lift with your dumbbells, the more strain it means on your muscles. Many tend to hold their breath at the moment of exertion – a dangerous reflex! “Then there is enormous pressure on the blood vessels, heart and lungs,” says Professor Morr.

Even with press breathing, i.e. too short, shallow breaths, you unnecessarily rob yourself of energy in your workout. The rhythm of breathing and movement can be synchronized, especially when training with weights. “Breathe out during exertion and in during relief,” advises the pulmonologist.

The right breathing technique while running

You mean: When running, your breathing rhythm should adapt to the beat of your footwork or even the beats of the music in your ears? Not correct! Don’t waste energy concentrating on special breathing techniques – the body gets what it needs on its own. But you can support him: Always take a deep breath, preferably from your stomach.

But that only works if you have consciously exhaled really deeply beforehand. This will also prevent stitching in your side. Because if you do not get into a lack of oxygen, cramping of the diaphragm is also less likely.

Breast and back swimmers fight against splashes of water, but breathe easily over water. With the crawl it gets more complicated: Most of the time the head is under water, which prevents the automatic breathing. The fact that you cannot gasp for air spontaneously and at any time takes getting used to – and makes a regular breathing rhythm essential.

Try a three-way rhythm: 3 arm movements are followed by one breath; this ensures your oxygen supply even when you are exerting yourself. To breathe, turn your head slightly to the side so that your temple rests on the surface of the water. That doesn’t disturb the overall movement either.

Active yoga means active breathing: an even and controlled flow of breathing sharpens concentration on the body and its limits. Movements arise from these deep breaths, the rhythm is part of the exercise depending on the yoga direction. Basically, if you move from calm and flowing breaths to short and hectic ones, this is a clear indication of excessive exertion.

Then be sure to shift down a gear. Focus your breathing again and draw attention to strength and stretching, because only with long, deep pulls do the muscles work efficiently. “Tracking down and breathing as a relaxation element are important,” says Morr. The end of an exercise should result in a harmonious body feeling.

The right breathing technique when cycling

What is an advantage for the aerodynamics on your bike can easily become a disadvantage for the oxygen uptake: If you lean your upper body forward too flat, breathing may be impaired. While you are still actively breathing in, the exhalation is largely passive – which, in combination with your position, often leads to shallow chest breathing.

“The strong curvature of the body compresses the chest and constricts the stomach.” The expert therefore recommends a more upright posture for beginners.  Additional tip: It is best to get air through your mouth when you are exerting yourself. Since the mouth opening is larger, the resistance is reduced, the muscles are less stressed and you ultimately save energy.

Correct breathing during exercise is important. Because the more you do, the more oxygen your body needs. By improving your breathing technique while exercising, your body will be adequately supplied with oxygen, you will last longer, you can really give your all and surpass yourself.

Previous: What a blood test can tell you about your health
Next: 10 best Pre-Workout snacks

The best crack butt exercise: This is how hip lifting works

Many people like Kelly credit cannabis with helping them cope with symptoms of depression. Anecdotal evidence for the herb’s ability to help abounds, but when it comes to studies and ...