This is what your nails tell you about your health

Fungal infection or suspected lung disease? Look carefully at your fingernails. These deformations and discolorations can indicate illness.

The eyes are the gateway to the soul, while the fingernails are a mirror of our health. But do you really have to drink more milk if you have white spots on your nails, because that’s supposed to be a sign of calcium deficiency? And are blue fingernails an indication that you have too little oxygen in your blood? Our expert, the dermatologist Dr. med. Ute Siemann-Harms, senior physician at UKE-Hamburg, explains the myths of nail science. It shows what color, structure and shape of the fingernails can actually reveal about your mental and physical health.

This is what healthy fingernails should look like: a smooth surface without dents, with a subtle sheen, a light pink color and elastic. If this description doesn’t fit your fingernails, you can use these 6 steps to change it for nicer nails . If you don’t have the so-called “nail moon” under every fingernail, which looks like a milky-white crescent moon and goes directly from our nail bed, there is nothing to worry about. Everyone is different. The nail moon is often no longer recognizable on the little finger.

The fingernail grows on average about 0.5 to 1.2 millimeters per week. In older people, nails grow more slowly. There are also seasonal fluctuations, the nails grow a little slower in winter and faster in summer. Why? Simple answer: The UV light from the sun promotes the production of vitamin D in the body. This in turn stimulates nail growth.

What are 3 the most common fingernail disorders?

If the fingernail is directly affected, i.e. does not indicate any other indirect disease, then it is often one of the following diseases:

Brittle, grooves, dents in fingernails: what do fingernails say about diseases?

Discoloration of fingernails: what do yellow, white, green fingernails mean?

Conclusion: If there is any discoloration, go to the doctor

If your fingernails are discolored, you should see a dermatologist ( the color of the toenails can also indicate diseases ). Bacteria in the nails and skin could be the cause here. A black spot can – if there are no bruises or other accidents – be an indication of skin cancer. On the other hand, the shape or color of the nails rarely say anything about a nutritional deficiency. Only if the nails split horizontally would this be an indication of iron deficiency. However, this is more likely to be attributed to a thyroid disease than to a direct food deficit.

Previous: This will reduce your risk of developing diabetes
Next: This is how you effectively protect yourself against the coronavirus 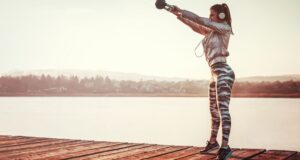 Not just because of Corona: 5 reasons to train outside

Measuring and treating: The 5 best tips for fever

Fever is a pretty clever protective mechanism for your immune system. We explain here when you should take action against it and how. You’re hot and cold, your body feels ...