These 6 types of meat are healthy and low in fat

Meat provides plenty of protein, which keeps you full for a long time and thus helps you lose weight. However, this only applies to lean meats – like these cuts of beef, chicken & Co.

Meat is one of the most important sources of protein, vitamin B12, zinc and iron. It is not for nothing that meat is considered the key to weight loss in diets such as Paleo, Dukan and Co.

So just eat more meat? No, because just because chicken, for example, is generally considered lean, does not mean that all parts of the chicken are equally low in fat.

So the question is: breast or rather leg, steak or schnitzel? We’ll reveal which lean cuts of chicken, beef & Co. are particularly recommended if you want to eat a low-fat and, above all, balanced diet.

1. Chicken: Lean and high in protein

The protein bomb among the low-fat meats is called: chicken breast. It provides a full 24 grams of protein per 100 grams and has a fat content of just 1 gram. However, this only applies to chicken breast WITHOUT skin, because the fat content increases significantly due to the crispy shell.

Chicken breast goes well with almost every side dish.

It is the same with the different parts of the chicken: While the breast is beautifully lean, the leg, for example, with 20 percent more fat, hits the hips quite nicely. The method of preparation also determines how fatty or low-fat your chicken dish will be in the end. The preparation in the oven is definitely lower in calories than if you sear the chicken with a lot of oil in the pan.

Incidentally, the cuts made from white meats, i.e. chicken and turkey breast cuts, are also lean.

Low-
fat: skinless chicken breast fillet Not low-fat: all types of chicken with skin , for example thighs or wings

2. Beef: all-round talent in the kitchen

Important B vitamins (such as biotin, niacin and vitamin B 12) and plenty of protein – beef offers all of this. Beef also provides a considerable amount of high-quality iron, which your body can utilize particularly well. Especially as a woman, you should keep an eye on your iron balance, as you belong to the risk group for iron deficiency due to your menstrual period.

Fillet of beef is particularly tender and lean.

If you then choose the right piece of beef, the treat remains extremely low in fat. Fillet, tartare and steak (not every one!) Are the low-fat variants of beef. The fine tartare in particular scores with just 3 grams of fat per 100 grams. Normal ground beef cannot keep up, because it provides 14 grams of fat for the same amount. But that’s still better than 20 grams of ground pork.

Besides chicken, turkey is one of the favorites among the low-fat meats. Just 1 gram of fat and 107 kcal are contained in 100 grams of skinless turkey breast.

The fat content of turkey meat also varies depending on which part of the turkey you choose, with or without the skin, and how you prepare it. The white breast meat is particularly lean, while the leg meat, for example, is much darker and tastes much more intense.

Pork is high in fat and totally unhealthy ?! Are you kidding me? Are you serious when you say that! The nasty rumors don’t apply to every cut of the meat. With the right preparation and choice of meat, pork can be very low in fat.

Schnitzel WITHOUT PANADE is a good choice for pork.

The good old schnitzel in particular is a positive surprise: with only 2 grams of fat per 100 grams, you can eat it more often with a clear conscience. But be careful: we are not talking about the classic schnitzel with thick breading, which is happily fried in liters of oil. Because with almost 10 grams of fat per 100 grams, that definitely doesn’t belong on the plate regularly.

Schnitzel means the “natural variant”, i.e. lean schnitzel without breadcrumbs. Also low in fat and very tasty: tender pork fillet. You can prepare it in one piece and then cut it open or cut it directly into small medallions, fry and enjoy. Add a few green or yellow beans and you have a healthy, low-fat main course.

Lamb is not only extremely varied to prepare, but also a very low-fat type of meat. Whether grilled, fried or braised: The tender meat always scores with a juicy taste.

Lamb chops are tasty, but lamb fillet is much lower in fat.

On a low-fat diet, however, you shouldn’t nibble on the popular “lamb chops” (cutlets with bones) as often. With 17 grams of fat per 100 grams, the crispy, juicy delicacy is anything but low in fat and should be replaced by a fillet piece. With just 4 grams of fat, this is the lowest-fat piece of lamb and won’t burden you too much.

With the fountain of youth among the lean types of meat – unlike pork – a piece of knuckle can sometimes land on the table. At 4 grams, the culinary delight is not the lowest fat of the veal varieties, but definitely not a fatty pleasure.

Veal medallions are easy to prepare with low fat content.

If you want it even lower in fat, you should use a piece of fillet – less fat in veal is really no longer possible. However, you should keep your hands off a chop. At 8 grams, it is not quite as high in fat as the lamb chop, but should not necessarily be eaten on a low-fat diet. 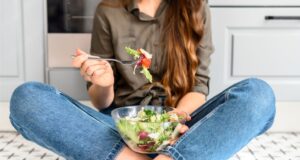 10 healthy veggie recipes that can be prepared in a flash

Do you want to change your diet? It works with these 6 tips!

These 6 foods accelerate your metabolism

Exercising hard means straining your body. Then eat these healthy foods to optimally support him in metabolism If you do an intense workout, it can happen that you still feel tired ...